Kidnapper and bunker rapist John Jamelske is confident he can do hard time in prison, but his defense team is hoping he’ll be assigned to an isolated unit in the Adirondacks where high-profile convicts are often sent for their own protection.

“He has this sense of bravado like, ‘I can do this prison thing,’ ” said Rick Luciani, who was part of Jamelske’s defense team. “He wanted to give it a shot at Auburn (Correctional Facility). I said, ‘John, Auburn’s a pretty tough place. I’m not trying to be an alarmist, but that’s the reality of prison life.’ ”

In a memorandum filed with the courts and the state Department of Correctional Services, Jamelske’s defense team requests he be

placed in the Assessment and Program Preparation Unit, or APPU, at Clinton Correctional Facility, the men’s maximum-security prison in the Clinton County village of Dannemora.

The 254-man APPU is a self-contained prison-within-a-prison that opened in the late l970s to handle inmates with real or imagined fears of other prisoners, and to prepare them for eventual return to the general population.

Inmates whom corrections officials deem “vulnerable” because of the notoriety of their crime, physical frailty, previous work as law enforcement officers, or their inability to deal with verbal and physical confrontations with other inmates, are granted refuge at the APPU.

Serial killer Joel Rifkin, 44, currently calls the APPU home. Other notorious residents over the years were “Son of Sam” killer David Berkowitz and the late rap artist Tupac Shakur, whose 6-foot by 9-foot cell was furnished with 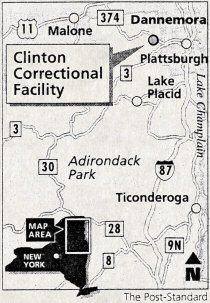 only a twin bed with a thin mattress, a toilet and a sink, according to news reports.

Jamelske’s temporary stay at a prison reception center at the Elmira Correctional Facility is now stretching into its seventh week – and he’s in protective custody, said his lawyer, Michael Forsyth.

Stays at the prison reception centers average six weeks, said Linda Foglia, a state corrections department spokeswoman. “He may very well not go (to the

What is certain is that Jamelske will go to one of the state’s l7 maximum-security prisons, Foglia said.

Jamelske was sentenced in July to 18 years to life for kidnapping five girls and women and holding them as sex slaves in a basement bunker in DeWitt. He was arrested after his fifth victim, a l6-year-old girl from Syracuse, made two secretive phone calls to her sister.

At first, Jamelske seemed reluctant to be assigned to the APPU, said Luciani, who, together with clinical psychologist Thomas Lazzaro, spent more than 30 hours interviewing Jamelske.

“His biggest reservation was that he’d be so far away from Syracuse,” Luciani said. “He said, ‘My heart just wouldn’t feel right. I just need to be near Syracuse.’ ”